How do you become a Head Student?

"The Head Student application process is an amazing opportunity to reflect on your strengths and weaknesses as a leader. This year, there was the largest number of applicants in Sixth Form history, with 32 students applying. For the two of us, it was something that we had been looking forward to since we joined the Student Leadership team in KS3. The two week process allowed us to practise vital skills such as good communication and interview techniques. We also had the chance to gain feedback on how we fare in demanding situations.

The Head Student application process is an amazing opportunity to reflect on your strengths and weaknesses as a leader.

The 24 hours that followed seemed to pass by in an instant. By the next day, we had the shortlist of 14 applicants. Next, like last year, we were asked to prepare a 90 second video instead of the traditional speech, and asked to ‘be ourselves’. Those two simple words proved to be a formidable challenge. What are our personal values? What do we want to communicate? Why should the KLASS community entrust us with this responsibility? 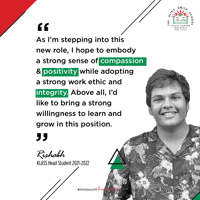 By Monday morning, the videos were sent out and we were notified of the upcoming interviews. The interview process, designed not only to learn more about us as individuals but also to gauge our capabilities as a part of a team, consisted of a group and then a solo interview.

The group interview allowed us to demonstrate our skills as team players, and the ability to collaborate with each other to reach a goal. For our group interview, we were tasked with the planning of the upcoming Induction Day. Getting the chance to work with the other applicants, some of which were people we had never worked with before, was one of our favourite parts of the application process, as we managed to find our rhythm once the time went on, and seamlessly worked with each other to tackle the task given.

Then came the solo interview. Although we were nervous at first, it’s undeniable that after a couple of questions, all the worry and nerves melted away, and the interview felt just like a conversation. But the hardest part of the process started once the interviews ended.

The waiting. Unlike before, time seemed to crawl on, and nerves started to rise. The realisation set in for the both of us that we couldn’t do anything but wait for the meet that would decide whether we were selected to be the new Head Students.

We received an email on that very Thursday, inviting us to a 1:1 meeting for the results on Friday. Filled with anticipation, we waited for our time slot, wishing for time to go faster.

When the time for the decision to be revealed finally came, the words “We’d like to offer you…” were like music to our ears; our joy and relief knew no bounds.

We have been able to see the impact the previous Head Students have had on our community; we hope to follow in their footsteps and hone these same skills. It’s an honour to be chosen for this position and to help connect the diverse community that makes Alice Smith so special."