In last week's blog we brought you news of the FOBISIA Short Story Competition and our two Primary School Key Stage winners:

The theme for the competition was ‘Memories’ and here are their winning entries for you to enjoy!

Every city had its own distinct smell.

London’s was a musky, dewy smell of damp bricks and rain. It smelt of home.

The frigid air chafed Alistair’s wrinkled cheeks. The map of wrinkles and freckles stood out on his round face; his eyes were two giant reflections of all his life experiences. His khaki vest told a thousand tales, and a million painful memories. He waited patiently on the pavement. There it was. A shiny and polished automobile pulled up on the dull grey pavement. A handsome young man dressed impeccably in a pitch-black suit opened the heavy vehicle’s door. Alistair's eyes instantly lit up. He was delighted to see his son. Soon, they had arrived at a colossal, beige building. Alistair's son pushed open the heavy, lacquered doors and revealed a huge crowd dressed to the nines, the air thick with perfume, cigar fumes, and a deafening chatter. Alistair's eyes darted around the room to take in all the  amazing auction exhibits. There was stunning jewellery, expensive watches, and gorgeous artwork. Suddenly, something strange caught his eye, something that seemed familiar and he turned to stare at it. Immediately, his face turned ghostly pale, his eyes were transfixed to the poster. He had seen this poster before… In a blink of an eye, the memories came flooding back and consumed him like a tsunami.

There he was, it was a glorious, sunny day in London; the cool breeze caressed his young, apple-like cheeks. He and his best friend Ben walked briskly across the city streets, looking for some action, the way young lads did. A vibrant poster caught his eye, standing out against the dusty wall it was stuck on. The plump officer on the poster pointed directly at them, and exclaimed “Who’s absent... Is it YOU?” His accusatory fingers and eyes followed them wherever they walked. The city had been abuzz with excitement about young men joining the war. It seemed to them that they would waltz in, collect their medals, and emerge unscathed as heroes. They thought the war was some sort of challenge, a fun one that would boost your fragile male egos. “I think we should sign up,” Alistair softly whispered. Ben seemed blown away by the words that came out of his mouth, because he simply jumped back in disgust. Ben nodded and sighed, he felt like a robot, being controlled into entering a playground of death. If only Ben had emerged without a scratch.

A dreadful night. Stuck in the trenches, the smell of moist dirt and blood wafted around the area. The ground consistently shook and Alistair was starving to death. Death surrounded him, ear-splitting gunshots deafened him. Ben stood up, searching for enemies when…

BANG!! The gunshot was thunderous and clear. There he was. Ben, his best friend he had known for years, lying on the ground, with raw pain in his eyes. His uniform was covered in large bloodstains, his hand clutching his chest. Guilt overtook him. It was all his fault.

Alistair scooped his dying and weakened friend, grasping his cold, pale hand. Ben took his last breath before his body went limp and he was sent to a far less cruel place than Earth.

He was at peace now. A fat tear dashed down Alistair’s young face. He looked straight up, where Ben might have gone and wished longingly for him back.

The Magnificent Machine by Finn in 4S 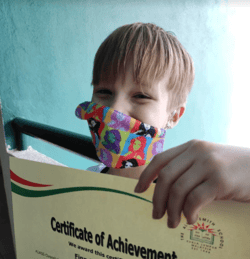 In a strange, foreboding forest, lived a man. His wild, unkempt hair went down to his knees, and it was flecked with grey. This inventor's goal was to collect shimmering gemstones, yet this was not always the case. Years before, he loved to spend time in his compact cottage, spreading joy with his family. This is his story.

One bright sunny day, Horace created a magnificent machine. An incredible machine that turned memories into shimmering gemstones. Horace was overjoyed at his creation, as his contraption was one of a kind. He began by slowly feeding it small memories, like what he ate that day, or what he did in the morning. Unfortunately he soon became obsessed, and colossal piles of gold came out whenever he fed it a memory. The bigger the memory, the bigger the gemstones.

As the days stretched on, Horace’s obsession grew and grew, so he fed the machine, now thought of as evil by her family, more precious memories, until gems were the only thing he would pay attention to. Soon after, his wife died, alone because of his actions. Later on, his daughters ran away, unable to bear the unending misery of spending all their time with one so evil. Without his family by his side, Horace was no longer Horace. He was a twisted, malicious creature, driven to insanity by obsession with brilliant gems, his only purpose to collect more and more of them.

Many years had passed, yet it felt like a hundred years or more. Ivy and Evanlyn, Horace’s daughters, had grown up, and had families of their own. Unfortunately, their mother had passed away. As the sunrise blanketed the world in a brilliant orange light, they arrived at the ancient cottage. As they opened the door they saw their names, finely embroidered onto an exquisite letter. After lifting the seal, they saw a letter that begged them for forgiveness, and said that Horace’s most precious memories were waiting for Ivy and Evanlyn. Fearing the worst, they turned on the machine, and it whirred to life like the hum of a cricket. They felt like it had taken her mother away. They also felt shameful because they didn’t help their mother.

As the last drop of precious memories turned to colossal piles of magnificent gemstones, Ivy and Evanlyn’s hearts felt as heavy as mountains. The daughters realised that it was not his fault, it was because of the malicious machine. Ivy and Evanlyn decided they were going to make a better choice. They rose from their chairs, each taking a single gemstone, and left the ancient cottage, never looking back. 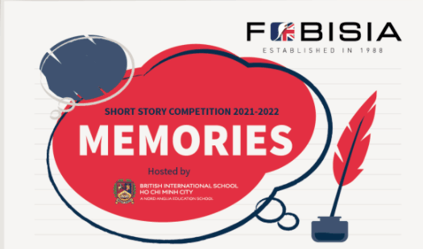 Editors Note: We'll be bringing you the Secondary School winners next- so keep watching for more great short stories!