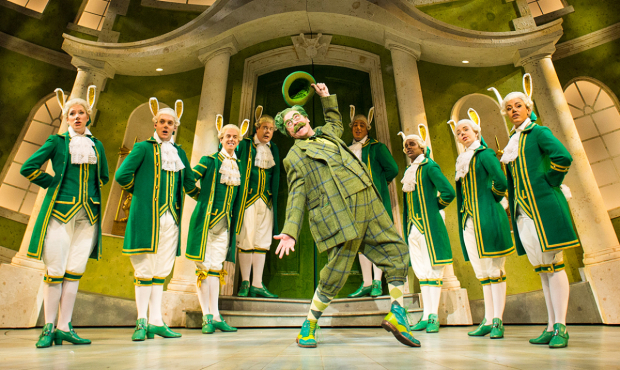 In last week's 'Culture in Quarantine' blog, Holly Sullivan, our Head of Creative and Expressive Arts, shared with us a whole host of online plays, musicals and operas to enjoy during the MCO. Lots of you have taken advantage of these online treats and below you will find reviews and recommendations from members of our #KLASS Community. Do remember though some of these are only available for a limited amount of time so don't delay and get watching!

Leah, Reception, on The Snow Mouse

Preyankka, Year 8, on The Wind in the Willows 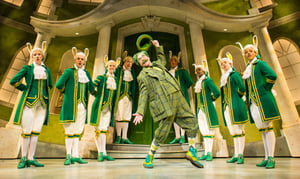 This production was so funny and entertaining. Each character had their own very distinctive personality. Furthermore, I loved how they choreographed their dances as it was absolutely phenomenal. The songs were amazing and I think my favourite one would be the one Mr.Toad sang about himself. My favourite part about the whole production was the curtain call. It was not a boring one but a really exciting one. When Mr.Toad came out from the air I was laughing so hard and just wishing that I could do that. ★★★★★

Erin, Year 7, on Joseph and the Amazing Technicolor Dreamcoat

Joseph and the Amazing Technicolor Dreamcoat is a fantastic performance, It engages the audience with its fascinating storyline of jealousy and rivalry . Joseph is sold off by his 11 brothers to serve a millionaire in Egypt, but Joseph has a more intriguing skill of interpreting dreams. The musical is short but definitely a must watch; the music composed by Andrew Lloyd Webber is upbeat and exciting and helps you travel back thousands of years and lead you through Joseph's tragic yet inspiring story. ★★★★ ½

Ms Sullivan, Head of Creative and Expressive Arts, on The Magic Flute

When I saw the English National Opera’s production of Mozart’s The Magic Flute at the London Coliseum in 2013 it was my first experience of really enjoying opera. I had been lucky enough to watch a few operas but none had gripped me like theatre does. That was until I saw Simon McBurney’s The Magic Flute, which is now being streamed online. McBurney is the artistic director of one of my favourite theatre companies, Complicité, and he is known for his highly theatrical staging and magical approach to storytelling. Currently, the Year 12 Drama and Theatre Studies students are devising their own piece of theatre around the methodologies of Complicité so I was delighted to be able to share this stellar production with them. Whether you are a seasoned opera fan or not - watching The Magic Flute is a wonderful experience. ★★★★★

One Man Two Guvnors is an adaptation of the play A Servant To Two Masters, a 1743 Commedia dell'arte style comedy by the Italian playwright Carlo Goldoni. This adaptation by Richard Bean has a more modern take on the original. The main role of Francis Henshall played by James Corden was cast perfectly by director Nicholas Hytner as Cordon’s comic timing is impeccable and his ability to interact with the audience was not scripted. The same could not be said for the plant in the audience - I thought her acting was absolutely appalling and was a complete letdown. On the other hand, another stand out actor was Trevor Laird who played Lloyd Boateng. His portrayal was absolutely outstanding; this was since he only had a minor part and yet was one of the most memorable. My favourite part of the play was when James Corden delivered a perfectly timed monologue about Henshall’s past and what had led him to this very moment, which was coupled with the physical theatre. The skiffle band that played during major scene changes were highly entertaining upon listening to the lyrics of the pieces they played while actually singing about what was going in in the play. On the whole, the play was a very intriguing watch and is highly recommended. ★★★★ 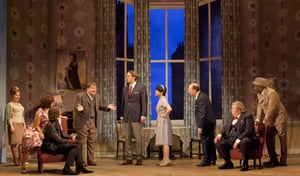 As a hugely successful and well loved play, I expected to enjoy this performance, therefore it was a little disappointing as I feel that it failed to live up to my expectation. I appreciate that it is farcical and is therefore a particular style of theatre, yet I found the slapstick comedy difficult to watch at times and the overacting uncomfortable to view. I feel that all the actors gave a strong performance, with a standout performance by Suzie Toase as ‘Dolly’. However I feel that the comedy overly relied on continued food references that I found predictable and tiresome by the end, with act one being a particularly bad culprit. Fortunately, as act two relied less heavily on the food gags, I found myself enjoying it more. Whilst this is not my favorite style of theatre, I can appreciate the interwoven storyline and the critical timing of line delivery and the actors portrayal of the characters, and even though most of the jokes didn’t tickle my fancy, I found ‘Dolly’s’ feminist jokes relevant to todays audience and more sophisticated when compared to the other jokes. Therefore, for a commedia dell'arte, it was highly successful in that respect! Overall, it was a pleasant experience, a pleasure that was heightened by the knowledge that even whilst stuck in isolation, I was given the opportunity to engage with the national theatres archive and sat in marvelment at the viewing platform bringing theatre to a captive audience currently trapped in a social lockdown. ★★★

Set in 1963 London, James Corden’s energetic and hilarious performance as the hapless and perpetually peckish Francis is a real highlight of this comedy. Struggling to keep his two ‘guvnors’ in the dark about his dual employment, we are taken on a farcical journey that includes gangsters, a sister masquerading as her murdered brother and a doddery waiter. Great audience interactions that had us in stitches. Some swearing and adult themes.

I'm a secret opera lover and my favourite composer is Puccini. I only realised a few days ago that The Metropolitan Opera, New York has started posting past productions for free, so was able to see for the first time their production of La Fanciulla del West, starring Deborah Voigt, Marcello Giordani, and Lucio Gallo, and conducted by Nicola Luisotti. It's set in the US goldrush period and is a fabulous production with some wonderful performances. It's long (over two hours) but of course you can watch it in shorter stints if you'd like. Best of all, it's free. ★★★

Ms Watkinson, Drama Teacher and Head of Muir House, on Sepet The Musical

Sepet The Musical is a heart-warming romantic-comedy by Liver & Lung productions starring our very own Alice Smith teacher Badrika Bahadur and music co-written by our A Level student Badrish Bahadur. A beautiful love story, adapted from Yasmin Ahmad's iconic Malaysian film, that follows Jason, a VCD seller and student Orked as they navigate cultural divides and family expectations. The duo cast, perform superbly, flitting from moment to moment, holding the audience spell-bound to their character's journey. Take your ears to the song 'Sayangku' found on Liver&Lung's YouTube channel to capture a piece of the magic. ★★★★

I love how Sally Cookson’s Jane Eyre powerfully captures Bronte’s feminist message through the play’s fierce presentation of Jane, the brilliant cast that act each carefully chosen line with such conviction, and the Woman in 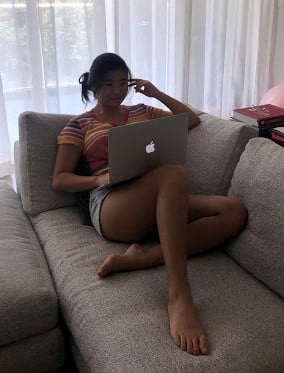 the Attic’s despairing song that yearns for affection, connecting the two misunderstood women in their struggles. I enjoyed the physical theatre and staging that are extensions of Jane’s psychology, highlighting the fact that the focus of this adaptation is Jane’s journey, where she purposefully battles inequality and entrapment, a journey that comes full circle when Jane has her own daughter- the cyclical structure of the play here leaving us with a resonating sense of hope. ★★★★ 1/2

Let us know which productions you watch and what you think of them @AliceSmithSch.