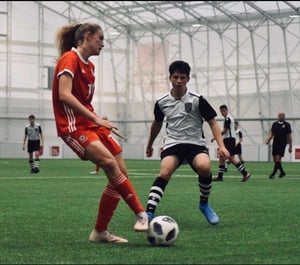 It's been a baptism of fire for Lauren Purchase as she enters the world of top tier football; having successfully trialed for well-respected Birmingham City Football Club; Lauren made a last-minute pre-season decision to sign for Championship winners and newly promoted to the Womens Super League (WSL), Aston Villa and will now be taking up a much sought after Academy position in July 2020.

Lauren, one of our Year 11 students and a 5 capped Wales squad player, will return to the UK in the summer of 2020 to take up this Academy squad place.

Lauren, notwithstanding COVID disruption, managed to impress the coaching team in her successful 2019 trials such that they tracked her progress, including contributions to Wales’s successful UEFA cup qualification in Spring 2020.

Lauren said “I’m delighted, what an honour, the history and presence of ‘The Villa’ coupled with the squad playing a fast, aggressive, thoughtful and precise form of football; I’m so looking forward to playing the UK northern WSL league including opposition such as Man Utd, Man City, Everton."

Aston Villa’s “top tier facilities” include newly invested in, gyms, indoor and outdoor pitches, specialist training zones, nutritionists, all of which is available to the Academy Squad. 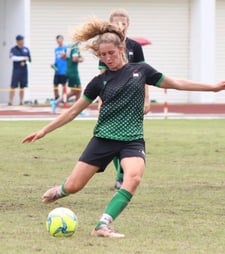 Lauren will join one other Welsh capped player as well as 18 other handpicked players, from the grass roots of Aston Villa and other clubs from across England and Wales.

Lauren will undertake her A levels at the well-respected Bishops Walsh Catholic Sixth Form, some 15 minutes from Aston Villa’s Bodymoor Heath training ground where she will split her time 50-50.

Lauren went on to say said; “The coaches at Villa have such tremendous vision and the skills and resources to back it up; it’s such an opportunity it would be madness not to snap it up and give it 100%; plus the chance to integrate play with Aston Villa’s first Team once a week is also so exciting, what a challenge.” 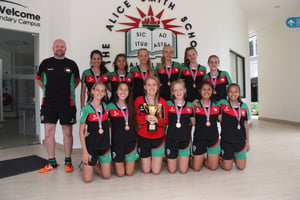 Lauren has been playing for the school U19 SEASAC Football team since she was 12 years old and has represented the school in multiple sports since she was in the primary school at Jalan Bellamy (JB). "I would like to thank Alice Smith for providing me with some special periods of education provision to help accommodate my international fixtures for Wales and some focused coaching which has certainly helped me along the way to achieve these results.”

Lauren is scheduled (Covid dependent) to play against Manchester United on 9th August.

Congratulations and Good Luck Lauren! We look forward to following your progress.